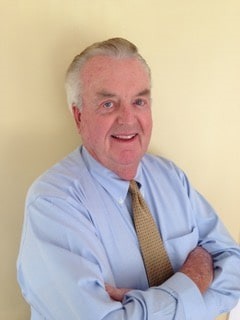 Ed graduated from Rider University with a B.S. in Industrial Management, and subsequently attended the Harvard Business School as part of IBM’s Executive Management Program.

His undergraduate and professional accomplishments were recognized in 2012 when he received the Rider University Distinguished Alumnus Award “for exceptional achievements as a student athlete, a U. S. Naval Officer, business executive, entrepreneur, consultant and serving as President of Congressional Country Club with distinction.”

Ed began his career with IBM before being inducted into the armed services. During this time, he was assigned to the Pentagon as a U.S. Naval Officer and served three tours for the Advanced Computer Technology Division. Upon completion of his assignment, Ed returned to IBM, eventually becoming the General Manager of the Telecommunications Unit. Ed later joined Accenture Corporation where his contributions facilitated a successful launch of Accenture’s IT consulting business in Washington, D.C. Ed was later recognized by Accenture as the most effective and successful relationship business development executive in the company.

An avid golfer, Ed utilized his love for the sport while at Accenture, effectively demonstrating the sport’s influence with televised promotional and client marketing. Ed was essential in establishing the Accenture Match Play PGA Golf Championship Tournament, which continues to be one of the company’s major advertising and brand recognition events. Ed’s passion for golf and its ability to play a role in executive relationship building has been instrumental for his successful, client-oriented career. While serving as President of Congressional Country Club, Ed initiated and served as the point man in negotiations with the USGA to host the U.S. Open at Congressional in 1997 and the subsequent U.S. Open edition in 2011.

After a long and successful professional career, Ed has chosen to step back and is currently working as a referral agent for The Burr Group. He lives in Quarry Springs with his wife Nancy and they have four adult children.

$1,283,522
3807 Underwood St
Chevy Chase, MD 20815
Chevy Chase
3
Beds
2F11/2
Baths
1,548
Sq.Ft.
MLS #: MDMC2000497
Search All Area Listings
Advanced Search
Featured Communities
Montgomery County Properties
All Residential
New Today
Price Reduced
Recently Sold
The information being provided by Bright MLS is for the consumer's personal, non-commercial use and may not be used for any purpose other than to identify prospective properties consumer may be interested in purchasing. Any information relating to real estate for sale referenced on this web site comes from the Internet Data Exchange (IDX) program of the Bright MLS. TTR Sotheby's International Realty is not a Multiple Listing Service (MLS), nor does it offer MLS access. This website is a service of TTR Sotheby's International Realty, a broker participant of Bright MLS. This web site may reference real estate listing(s) held by a brokerage firm other than the broker and/or agent who owns this web site.

The accuracy of all information, regardless of source, including but not limited to open house information, square footages and lot sizes, is deemed reliable but not guaranteed and should be personally verified through personal inspection by and/or with the appropriate professionals. The data contained herein is copyrighted by Bright MLS and is protected by all applicable copyright laws. Any unauthorized dissemination of this information is in violation of copyright laws and is strictly prohibited.